128 delegates Canadian delegates and 57 alternates attended the 40th IAM Grand Lodge Convention in Las Vegas, Nevada. The convention, delayed by two years because of the COVID-19 pandemic, was received with a mixture of joy and relief at finally being able to conduct the union’s business after six long years.

David Chartrand, Canadian General Vice-President, attending his first convention as GVP, was glad to have the North American membership gather together to plan the way forward. “We worked hard to make this happen and now we can create the map which will point us in the right direction – and I’m glad we are doing it collectively.”
International President Robert Martinez Jr. opened the convention, “Our members were essential before the pandemic, they were essential during the pandemic and they will continue to be essential long after the pandemic,” said “If anyone had any doubts about the strength of our union, just look at what we have accomplished when our members needed us most.” 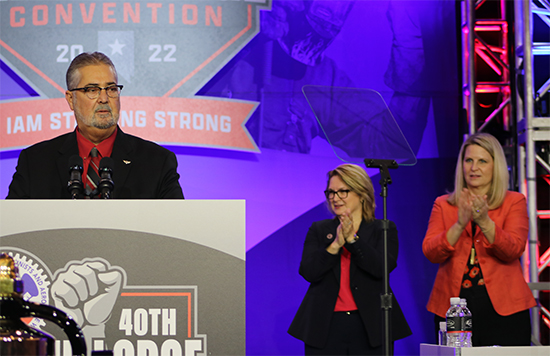 History was made at the 40th Grand Lodge Convention. 20% of delegates are women, the highest percentage ever! Martinez thanked the members for sending the women delegates and urged them to do even better for the next Convention.

“Sisters and Brothers, we are living in a moment in time when public support of unions is the highest it’s been since 1965,” said Martinez. “Millions of workers across North America would join a union today if they could. We must have more organizers and to do that we must fund it. I need your support this week to hire an ARMY of organizers to grow this union like never before.”

President Martinez also emphasized successes in the union’s programs, some that are the first of their kind:
• The LEADS Program is designed to continue the advancement of IAM women by offering new pathways to leadership through education and career training at the W3 Center.
• The IAM Addiction Services Program, under the direction of Vinny Ceraso, has saved countless lives with a 24-hour hotline.
• The world-class IAM Employee Assistance Program continues to help members find mental health counseling and more.
• The IAM’s Critical Incident Response Team has comforted members after workplace violence, on-the-job tragedies and more.
• The IAM’s Disaster Relief Program has helped members get back on their feet after hurricanes, tornadoes, earthquakes, wildfires and other natural disasters.

“The bottom line is that this union is here for you and your family because this union is a family, Sisters and Brothers!” said Martinez. 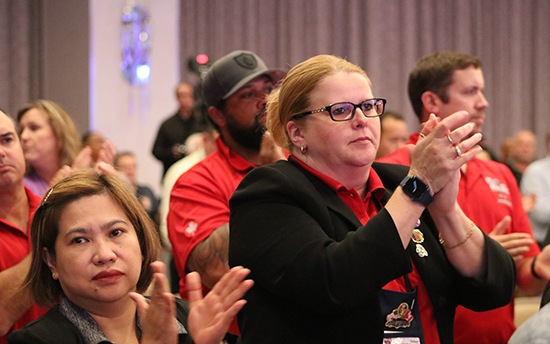 A highlight of Day Two of the Convention was when Liz Shuler and Bea Bruske spoke to delegates.

Liz Shuler, President of the AFL-CIO, is the first woman to lead the venerable organisation after being the Secretary-Treasurer for many years. Shuler listed the many victories the IAM has had in recent months in non-traditional sectors of the labour movement. She also thanked the IAM for our leadership in the American labour movement.

Shuler was followed onto the stage by Bea Bruske, President of the Canadian Labour Congress. Bruske, elected to the office in June 2021, is only the second woman to lead the Canadian labour movement. “Our members, when they’re engaged, shape the direction of the countries we live in,” said Bruske, urging IAM members to continue with their political action and activism. “We win when union members get involved and lead the way.” Both leaders noted the highest-ever number of women delegates at the Convention.

GVP Dave Chartrand also remarked on the greatest-ever participation of women delegates by saying, “It’s past time that women take their rightful place in their union. Along with the presence at Convention, we must see greater representation at locals and districts. Women are critical to the future of this union,” he said, “and Canadians will make sure we do even better the next time.” 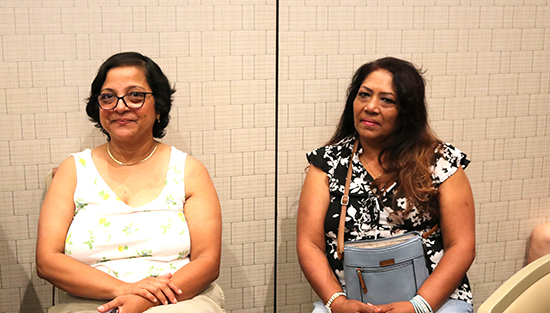