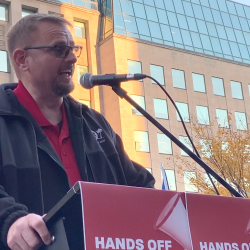 I was proud to be at the emergency rally organized by the Ontario Federation of Labour in support of Ontario’s 55,000 education workers, The demonstration is in response to the “Keeping Students in Schools Act,” which is being debated at the Ontario legislature at Queen’s Park. The Bill, introduced on Monday, would prevent a planned strike by the Ontario education workers represented by the Canadian Union of Public Employees (CUPE),