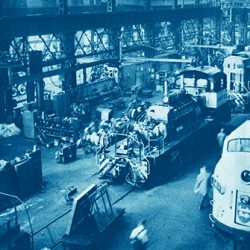 Nineteen machinists working for the East Tennessee, Virginia, and Georgia Railroad gather in a locomotive pit to decide what to do about a wage cut. They vote to form a union, which later became the International Association of Machinists (1888).​The union was originally called the Order of United Machinists and Mechanical Engineers and later changed to the National Association of Machinists. Thomas Talbot, the union’s founder, believed that a union