Winnipeg, MB – One hundred years ago today the labour movement in Canada had learned clearly: it had to move into direct political action, if workers’ rights were to be protected. Today we celebrate the 100th anniversary of the beginning of The Winnipeg General Strike. 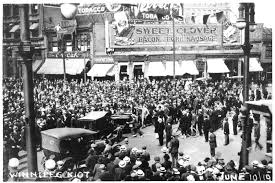 Nowhere was this more evident than in Winnipeg, Manitoba. There, workers in the construction  and metal industries attempted to strengthen their bargaining ability by creating umbrella unions – the Building Trade Council and the Metal Trade Council.

Workers from both industrial groupings went on strike to gain union recognition and to compel employers to respect collective bargaining rights.

The spark that ignited the Winnipeg General Strike was provided by Machinists from IAM Local Lodge 122 under the leadership of R.B. Russell and Peter Henrenchuk at Dominion Bridge. 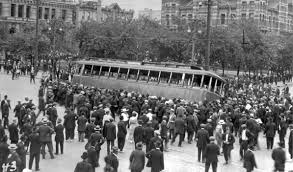 By 11:00 am on Thursday May 15, 1919, virtually the entire working population of Winnipeg had gone on strike. Some 30,000 workers in the private and public sectors had walked off the job.

Business leaders and the governments they controlled reacted with repressive measures. The strike lingered through May and into June. The arrests of strike leaders J.S. Woodsworth (who  later helped found and led the CCF Party, today’s NDP) and seven others on June 10th, 1919 led to clashes between protesters and the Royal Northwest Mounted Police. Clashes continued and on June 21, 1919, two workers were killed. Fearing more violence, the strike leaders called an end to the dispute on June 26, 1919. The end of the Winnipeg General Strike did little to bring labour peace to Canada in the summer of 1919; in fact, turmoil lasted into 1920. 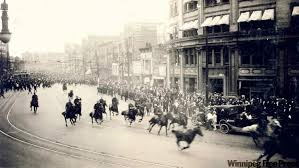 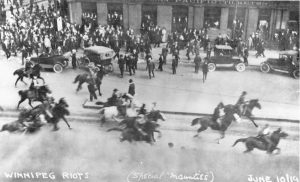 To mark the 100th anniversary of the event, the IAM will be holding an Organizing Conference in Winnipeg May 23-24 and the IAM bus, built by Motor Coach Industries of Winnipeg, will be the center piece of the IAM contingent of the 2.5 kilometer-long parade being held Saturday May 25th to commemorate the 1919 General Strike.